How to remove varnish from oil

How to remove varnish in your mining equipment

When Varnish strikes in hydraulic systems, mobile mining equipment etc, the costs associated with a production outage are often very high. The precursors to varnish, the so-called soft contaminants, are created in the hot spots in the oil system, and might cause damage to bearings, pumps and high flow in-line filters. To treat and remove Varnish, installation of a CJC™ Fine Filter is highly profitable. When installing a CJC™ Fine Filtration unit to treat a system that has an issue with Varnish, it is important to take an individual approach to monitoring and maintaining the unit and the system. In establishing this approach and procedure it requires a clear understanding of some key areas:

What is Varnish and how is it formed

Why each system is different

Due to the fact that even identical hydraulic systems on the same machinery will almost always operate under different conditions the rate at which the oil degradation occurs and therefore the level of Varnish deposits will be different from one machine to the next.

This will be a result of many different factors, which may include, but are not limited to, the following:

As a result, the rate of oil degradation will vary and the level of Varnish deposits for each machine will require an individualised approach to monitoring. This will also influence the time required to reach a satisfactory result, as well as an impact on the number of replacement CJC™ Filter Inserts required to achieve those results.

When installing a CJC™ Fine Filtration unit on a hydraulic system with Varnish issues, the unit will clean the oil from degradation products and shift the equilibrium. The clean oil will slowly clean system components, where varnish has settled out.

Because the CJC™ Fine Filtration unit removes mostly the soft contaminants that cause Varnish to form, it requires establishment of a different set of protocols to measure the effectiveness of the unit, the saturation of the CJC™ Filter Inserts and the stages of Varnish removal.

The best and most cost-effective way to monitor all these areas is Membrane Patch Colorimetric (MPC) testing. Whilst the MPC testing indicates the Varnish potential of the oil, it does not indicate the level of Varnish that has been deposited in the hydraulic system. Another area that the MPC testing can be used for is as an indication of filter insert saturation with soft contaminants via absorption (into the core of the cellulose fibres). To effectively monitor these areas an MPC test of the system oil is carried out prior to the installation of the CJC™ Fine Filtration unit with MPC testing continued at regular intervals after the installation. The intervals for this continued testing will vary depending on the conditions of each system and the stages of Varnish removal.

Once the CJC™ Fine Filtration unit has been installed it is expected that during the initial oil cleaning the soft contaminants are removed from the oil, and the first MPC test will show a dramatic drop in MPC, compared to the pre-installation MPC test. After this initial drop in MPC the clean oil will begin to flush and dissolve the Varnish deposits from the system and subsequent MPC tests will show a sharp increase to approximately 60-80% of the pre-installation MPC test. After this increase the MPC will begin to fall slowly as the process of removal of soft contaminants via absorption and dissolve Varnish deposits. This continues until all the Varnish deposits are removed an equilibrium is achieved between the oil and the system. The continued MPC testing will enable tracking of this process but it will also indicate the saturation of the CJC™ Fine Filtration CJC™ Filter Insert with soft contaminants. Any plateau or rise in MPC during this phase of Varnish removal will indicate the saturation of the CJC™ Filter Insert with soft contaminants and the CJC™ Filter Inserts should be changed at the next scheduled service for the equipment. 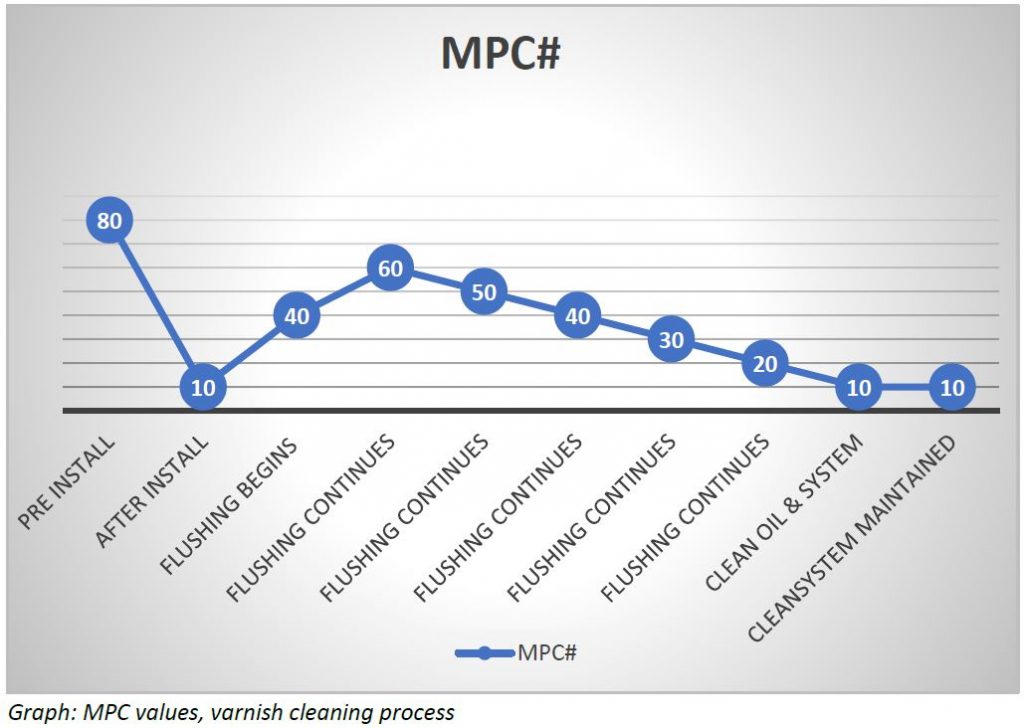 Above graph represents the expected progression of the system being cleaned of varnish. It is virtually impossible to determine the exact time it will take to complete the process as was indicated earlier that all systems will vary based on several key factors particular to the actual system being cleaned.

Furthermore, it is impossible to determine the life expectancy or number of CJC™ Filter Inserts required to carry out this process. These will both be affected by the pre-installation conditions, the operating conditions of the machinery and the MPC# at the time. The pre-installation conditions will determine the level of Varnish deposits present and could also affect the system temperature and the generation of additional soft contaminants. The operating conditions will also affect the running temperatures and the rate of generation of soft contaminants. The MPC# at the time will influence the speed that the Varnish deposits are dissolved, the higher the MPC the slower the stripping process will be, and it will also influence the time it takes it saturate an CJC™ Filter Insert even if the flow rate remains constant.

Other areas to observe during this process that will help in evaluating the success and the stages of Varnish removal would be through visual inspection and system operating conditions. When the system is shut down for maintenance, if possible, dismantle components that are known to have Varnish deposits and evaluate based on previous inspections. Possibly the easiest way to evaluate, if the system is having an effect is by observing how the machine is operating. Is the system operating quicker and smoother than before? Is the system running more efficiently? Are the operating temperatures dropping compared to the same time of the year prior to installation? Any of these factors could be a result of lower level of Varnish deposits in the hydraulic system.

After understanding the key factors of how Varnish is formed and removed, it is then possible to look at the steps to preparing for installation, installation and monitoring of the CJC™ Fine Filtration unit installed.

Maintaining the Highest Quality Fuels and Lubricants in your Mining operation
May 15, 2019